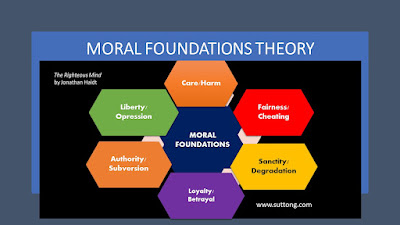 Moral Foundations Theory (MFT) was developed by  Jonathan Haidt and his colleagues. (See references at the end of this post). A good overview of the theory can be found in the book, The Righteous Mind (2012).


There are five core moral foundations in Moral Foundations Theory.

An additional foundation of liberty has been added to the theory so there are now six foundations.
The core moral foundations
1 Care-Harm: derived from the development of attachment and empathy, people value the moral virtues of kindness, gentleness, and nurturance and abhor causing pain to others.
2 Fairness/cheating: people have developed a sense of reciprocal altruism, which leads to concerns for justice, rights, and autonomy. Equality was dropped in favor of a sense of proportionality.
3 Loyalty-Betrayal: people form groups and tribes and a sense of loyalty to the group, which supports patriotism and a willingness to sacrifice for the group.
4 Authority/subversion: people organize themselves into hierarchies and consider leadership a virtue. Followers are expected to defer to legitimate leaders and show respect for group traditions.
5 Sanctity/degradation: derived from research into the psychology of disgust and contamination, people find certain things and by extension, some people, to be disgusting. There is a separation for that which is unclean. In religion, that which is sacred is set apart from that which is profane. Cleanliness of self and clothing are virtues. The body is a temple in some religious teachings.
The expanded theory includes a consideration of liberty.
6. Liberty/ oppression: people resist oppression and leaders who restrict their liberty. People hate bullies and tyrants.

Researchers usually find support for a two factor model.
Conservatives view moral issues from 3-5 perspectives with an emphasis on the foundations of loyalty, authority, and purity. Sociopolitical liberals emphasize care and fairness foundations. In A House Divided, you will  find examples of Christians using the same moral foundations in different ways. For example, in abortion arguments conservatives focus on care and harm of the unborn child and liberals emphasize care-harm concerns of the mother.


Notes
*I added the "aka" because you will find somewhat different words in some articles.

Consider buying Creating Surveys to help with your projects. 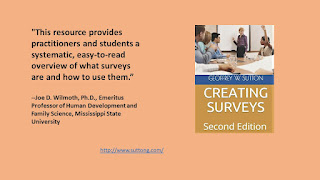 Available on AMAZON in multiple countries

Here are some applications of moral foundations theory:

For a recent study of Moral Foundations Theory, Identity, and Politics, see Sutton, Kelly, and Huber (2019).

Link to learn more about the Moral Foundations Questionnaire