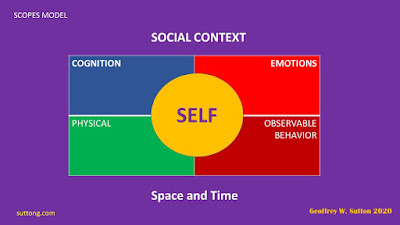 We are whole persons thus, focusing on only one dimension can lead to unrealistic views if we forget that each dimension of functioning interacts with the others. For example, our memories of important people from childhood are part of cognition but affect our emotions, behavior, and even our physiological reactions. Memories are part of our self-identity and may affect our spirituality too. Finally, our memories can be triggered by events in our social context like a photograph, a trip to our home town, or a movie.

THE SIX COMPONENTS OF THE SCOPES MODEL

S   SELF IDENTITY
Self-identity is a composite of several core features (see COPE below) that we recognize as who we are. We usually have more than one identity based on our roles in life (e.g., spouse/partner, parent, child, supervisor), personal characteristics (e.g., degree of fitness, health, intelligence, attractiveness, age), and groups (e.g., political, interest, sports fan, religious). For some, one or a few identities stand out as highly important such as spirituality (see below) or a major life role (e.g., mother, doctor).

We project ourselves to others through our core dimensions of expressed thoughts (cognition), feelings (emotion), observable behaviors (personality traits), and observed physical attributes. We may express our selves differently in different social contexts.

One of my research interests is in the psychology of religion and spirituality so let me give an example of  the spiritual aspect of identity. Spirituality includes religious and other ways people find meaning in life. Most organized religious faiths include specific beliefs and practices but these are integrated with each person’s experience. For example, a person’s dreams and visions or culture influence how they pray and what they identify as right and wrong. Atheists and those with nontraditional spirituality may describe meaningful experiences in the beauty of nature and music. For some, the spiritual dimension is so vital to their identity that it dominates their clothing choices, communicated beliefs, daily practices like prayer, interactions with others, music they enjoy, and what they eat or refuse to eat.

Following is an illustration of the SCOPES model where the primary self-identity is spiritual and they have a particular religious or spiritual worldview. 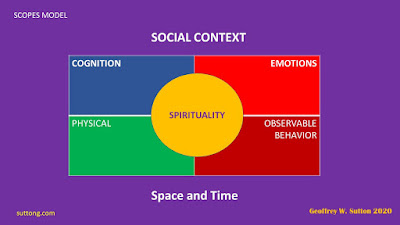 Examples of Test Related to the Self Domain
Self-concept scales
Self-esteem scales
Self-efficacy scales
Spirituality and religiosity scales
C   COGNITION
It doesn’t take long to form an impression of a person’s general intelligence. Sometimes we are awed and sometimes—not so much. But there’s more to cognition than solving problems on intelligence tests. We can include many neuropsychological processes such as memory, attention and concentration, language skills, and visual-spatial skills as well as cognitive biases and prejudices.
Some aspects of cognition have a huge impact on identity such as extreme deficits in attention span, incredible ability to solve complex problems, or persistent declines in memory for self and others.
Examples of Test Related to the Cognitive Domain
Tests of intelligence
Tests of achievement
Tests of language and verbal skills
Tests of creativity
Tests of memory
Mental status exams
O   OBSERVABLE BEHAVIOR PATTERNS OR PERSONALITY
I used the letter O so it works with the acrostic. Essentially, people may be described in terms of a few or many durable traits like the famous Big Five listed below.

There are other traits or characteristics that may be added like dominance and psychopathy. People are different. We usually act in fairly predictable ways--habit patterns and traits that are part of who we are. For example, we may be known to ourselves and others as agreeable or shy.
Examples of Test Related to the Observable Behavior or Personality Domain
Tests of personality e.g., Big Five, HEXACO, 16PF
Behavioral observations
Tests of various traits e.g., leadership, narcissism, psychopathology
P   PHYSIOLOGY OR BIOLOGY
We all come with bodies and many of us with less than culturally desirable bodies protest that we are more than mere bodies. We want to be known for what’s "inside". Nevertheless, our physiology is a critical part of who we are. Drives for hunger, thirst, sleep, and sex vary from person to person and those biological factors vary for each of us during a day, week, or year. Measures of biological status can change and influence other aspects of who we are- height, weight, blood pressure and more. Biology shapes our identity and we influence our biology and that of others.
We know that despite protests, people think of others in terms of a biological factor like blindness or deafness or another challenge. I am deaf in my left ear, but I did not think of myself as hearing impaired until I began to have difficulty hearing with my right ear. Now I wear a hearing aid. Some have a mental health diagnosis and are referred to by that diagnosis such as alcoholics or Schizophrenics. Some are known by a disease they have or survived such as cancer. One aspect of our entire personal identity can be a physiological status that is defining or confining. We know that we and others are more than a biological fact but somehow, we often fail to think beyond the “P” dimension. Physiology is a powerful part of self-identity.
Examples of Test Related to biopsychology
Tests of motor functioning e.g., grip strength, finger tapping
Tests of brain functioning e.g., MRI, EEG
Various lab tests detecting factors affecting the other domains
Tests of stress that include biopsychological symptoms
Questionnaires about sexual functioning
Questionnaires about alcohol and other drugs
Questionnaires about sleep, diet, and other health habits affecting other domains
E   EMOTIONS or feelings
Our emotions influence our identity and our judgments about others. There are many ways to show our emotions. Psychological scientists disagree on what may constitute core emotions. As a psychologist, I was tuned in to sadness, anxiety, and anger as well as joy and a sense of calm. More common emotions include fear, worry, hate, guilt, and that complex we call love. Feelings are critical to understanding who we are and why people do what they do. In some cases, our feelings can represent an important part of our identity as in I am a happy person despite times of sadness. And sometimes an "emotional identity" is less desirable.
Examples of Tests Related to the Emotional Domain
Tests of positive affect e.g., happiness, joy, love
Tests of negative affect e.g., disgust, sadness/depression, anger
S   SOCIAL OR OUR SPACE-TIME CONTEXT
The people in our lives and where we live out our day-to-day existence influences who we are even as we influence others. Our personal timeline is a factor too. We and others see common threads of who we are since childhood but we also see changes. Looking back, we may see events, people, or places that resulted in major changes in who we are today. Like many immigrants, the move from one country to another was a big deal for me and my parents.
Our relationships matter. Relationships affect our spiritual faith, thoughts, feelings, behavior patterns and even our health. A recently divorced cantankerous fifty-year old man with a history of alcohol abuse may feel anger, distress, and worry. A 35 year-old woman may feel happy and enjoy a sense of freedom as she boards a cruise with a friend. People are different in their relationships. Some feel liberated by divorce whilst others feel devastated. Some worry about finding a mate whilst others intentionally live a single life. Some prefer frequent interaction with friends whilst others require large periods of aloneness.

The people we identify as "my people" or "my family" and places (e.g., my hometown, my country) and epochs of time (I grew up in the 50s and 50s) may also be a part of our identity.
Examples of Tests Related to the Social Domain
Tests of relationships at home, work, places of worship, and other social settings
Tests of organizational relationships e.g., climate, trust, etc.
Tests measuring relational concepts such as forgiveness and reconciliation
SCOPES and HUMAN NATURE
The SCOPES model is a way of organizing information about ourselves and others. It is a way of recognizing we are complex beings who change in many ways. We respond to others and our environments in ways that change us. And we have an effect on others and our environment. At any given point, a few dimensions may be more important than others such as when we feel depressed at the loss of a loved one or celebrate a birthday.
We should also be aware that activity in one or two dimensions affects the other dimensions even when we are not aware of the effects. A loud noise like a gunshot can produce fear, thoughts of safety, memories of past terror, crouching, increased heart rate and even a cry for divine intervention.
Read More
I have included specific names of more tests in the research text, Creating Surveys.
I have applied this model to moral-social judgments in A House Divided an analysis of Pentecostal and Charismatic personality in Counseling and Psychotherapy with Pentecostal and Charismatic Christians.

Those familiar with psychology will recognize the common Cognitive-Affective-Behavior constructs in Cognitive-Behavioral-Therapy and attitude theory. Most clinicians have coursework in the biological basis of behavior. Some, but not all, also consider spirituality as relevant to understanding people and their well-being.
Many will also recognize the importance of the environment, which I include in the Social dimension. I have also been influenced by the BASIC-ID of Arnold Lazarus—a part of his work in Multimodal Therapy and Kurt Levin’s field theory or concept of lifespace.
Cite this post (APA)
Sutton, G. W. (2022, August 24). SCOPES model of human functioning. Psychology concepts and theories. Retrieved from https://suttonpsychology.blogspot.com/2021/07/scopes-model-of-human-functioning.html
Reference for the SCOPES Model.

You can read about tests and survey items to measure the SCOPES dimensions in my 2017 book, Creating Surveys. Available on AMAZON    and Google

The SCOPES model was applied to understanding morality in Christian cultures in A House Divided.
Sutton, Geoffrey W. A House Divided: Sexuality, Morality, and Christian Cultures. Eugene, OR: Pickwick. Also available on AMAZON. 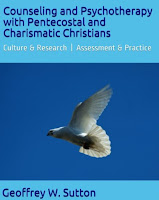