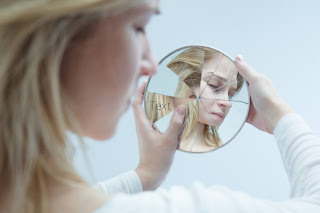 Self-concept begins to develop before children have speech as evident from studies of children responding to themselves in mirrors. They retain an image of themselves. Our self-image is part of our self-concept.

As in the SCOPES model where the first S represents the self, the self, or self-concept, is a mental construct that organizes information about ourselves and draws on information from the remaining four personal dimensions represented as COPE (Cognitions, Observable behavior patterns, Physiology, Emotions) all within a social context.

Self-identity is like a role we enact as part of a social group. Self-identity is who we are (self-concept) in a social context. Our roles include such common experiences as student, worker, lover, parent, child, and so forth. The context where we live out these roles demands we act in certain ways. In this way, social groups shape our identity within a group and influence our self-concept. Thus, schools, religious and social organizations, businesses, and political groups influence our identities.

Self-identities exist in a network and vary in degree of saliency in response to a social context. A psychologist providing psychotherapy may get word that their child has been taken to a hospital. The event makes the parent role salient and sets aside the career identity.

Race and ethnic identities are also very important to functioning in many cultures. Skin color, physical appearance, language and accent are some of the ways society identifies people as part of a particular group labeled as a race or ethnicity.

Gender Identity is a recent topic with an expanding literature. The terminology has changed rapidly as scientists and clinicians listened to peoples’ experiences about ways to understand gender identity and how people with different gender identities interact with others, which includes sexual orientation.

Identity theory considers how groups and people interact in a dynamic way shaping the self and the group. An example of this interaction can be seen in the interaction of political and religious identities influencing morality (e.g., Sutton et al., 2019).

Self-efficacy is the perception that a person can act in a way to achieve a desired goal. In 1977, Albert Bandura of Stanford University wrote an extensive article on the theory of self-efficacy. He proposed that our perceptions of self-efficacy come from four sources: “performance accomplishments, vicarious experience, verbal persuasion, and physiological states (191).” Click to read more on Self-Efficacy.

Self-esteem is the value people place on themselves. We learn our value in various social contexts. We are better at somethings and not other things. Self-esteem appears to influence performance in various life tasks. There are several measures of self-esteem.

Our awareness of various dimensions of ourselves. The focus of our awareness varies throughout a day. When focused on some activity, we ignore other aspects of our functioning. For example, some of us can ignore pain when we are busily engaged in the pursuit of some goal.

Note that psychological scientists have not been consistent in the way they use terms like self and self-concept. This lack of consistency is why I recommend thinking of the self and self-concept as equivalent. In addition, the terms self and self-concept have been criticized for being vague or as philosophers say, they are “fuzzy concepts.” Moreover, some clinicians see people as having multiple self-concepts, which maybe akin to experiences of people presenting as if they have multiple personalities or, functioning in dissociative states. Regardless of the disagreements, there is a large body of research about self-concepts and related terms and some evidence indicates that aspects of our self-concepts influence behavior.

To learn more about self-concept and self-identity, see the review by Oyserman et al. (2012). Also, see many of the books and articles by Roy F. Baumeister and his colleagues.

identity. J. Tangney and M. Leary (Eds). The Handbook of Self and Identity, 2nd