The toxic triad is commonly known as the Dark Triad. The triad consists of three sets of personality traits representing features of Narcissistic, Psychopathic, and Machiavellian personality clusters. 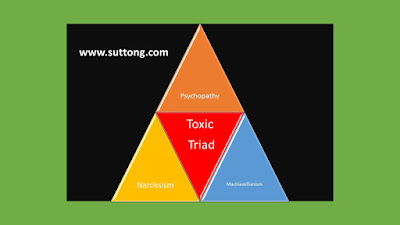 People with high levels of such traits can cause interpersonal difficulties but, when you add several together they can be considerable toxic by which I mean, such people can impact the mental health and well-being of those in their sphere of influence.

To understand the level of toxicity, we need to examine the key features of each personality grouping. Narcissistic traits were apparently observed by the Greeks in the classic myth. The key feature is the excessive self-praise and self-admiration, which doesn’t fit well with those who do not share the same opinions. Some people with narcissistic traits become political, business, and religious leaders. They can be difficult to work for and with.

Psychopathic traits include antisocial behaviors, low emotional empathy, low to no remorse for harming others, few inhibitions, and sometimes a capacity to charm others on initial contact. Leaders with psychopathic traits can wreak havoc in relationships, groups, and nations.

Those with less opportunity and somewhat muted traits, they may rise in politics, corporations, and even religious organizations leaving behind a trail of people who have been hurt physically, emotionally, and/or spiritually. If they are not removed soon enough, the organization itself may have suffered greatly or even cease to exist.
*****
In a meta-analysis, Muris, Merckelback, Otgaar, and Meijer (2017) reviewed 91 research papers with data on 42,359 research participants. Various personality questionnaires were used by different investigators. The relationship among the three groups indicated a closer relationship between the traits of Machiavellianism and psychopathy and a related yet more unique set of traits for narcissism.

There are gender differences. In the 50 studies that included data on gender differences, men were higher in the set of three traits than were women with overall effect sizes as follows: psychopathy (r = .29); Machiavellianism (r = .16), narcissism r = .15).

When the authors considered the shared variance, the primary difference between men and women was the presence of psychopathic traits.

Several studies compared the Toxic Triad to other personality traits. As you might expect, there was a negative relationship between the presence of the triad traits and a group of positive traits known as Honesty-Humility (HEXACO model: sincerity, fairness, greed avoidance, modesty).

Comparing the Toxic Triad to Big Five Traits yielded a large number of comparisons. The findings primarily focus on negative relationships with the Big Five trait of agreeableness. (Do see the tables if you wish more details.)

Consider buying Creating Surveys to help with your survey projects or students you teach.

The authors summarized their findings thus: “psychopathy runs the show.” That is, the negative impact on other people is primarily due to the traits of psychopathy rather than the other two clusters. Some other points are worth noting.

When the traits are measured with existing questionnaires (i.e., scales, tests, or measures), the three concepts overlap.

Some of the shorter questionnaires may not capture sufficient nuances in behavior patterns.

Some have considered adding sadism, which is the enjoyment of cruelty (Buckels, Jones, & Paulhus, 2013).

Posted by Geoffrey W Sutton at 8:30 AM

Geoffrey W Sutton
I write and give talks about Psychology of Religion topics.