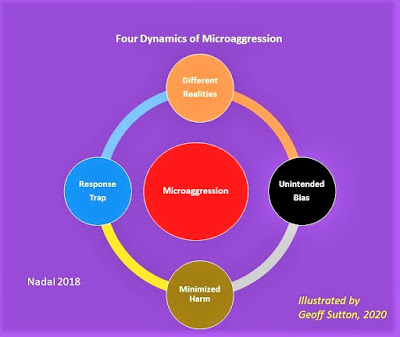 Based on a summary by Nadal (2018), I will review four dynamics and three categories of microaggressions.

1. Clash of Different Realities
People who experience the same event perceive it in different ways. The offender becomes defensive if the offended person complains and may add insult to injury with such remarks as: ”You’re too sensitive,” “You need to toughen up,” “Get over it!”

2. Invisibility or unintentional bias
Most of the US government leaders and heads of large corporations are healthy white men born in America. They continue to support their traditions as the standard way to live and behave. They are the ingroup having an unrecognized implicit bias that is hard to recognize because their ways seem so normal. Immigrants and minorities are expected to adapt to the cultural norms. If those in the dominant group are confronted, they may respond with denial or rationalization. They may even overcompensate (e.g., showing a photo of Black or gay friends).

3. Minimization of harm
This dynamic is the mistaken belief that the impact or these offensive actions is minimal and does not cause much damage. The reality is of course that people who are constantly hit with nonlethal verbal pellets end up sore and angry. Offenders may be totally unaware of the constant verbal hits a minority absorbs even by the time they reach adulthood.

4. The response trap
If an offended person does not respond, the offender will never learn but the offended person pays a price. The cost of responding can be measured in the time and effort it takes, the risk of dealing with a defensive and uncaring response, or even retaliation in physical or other ways such as demotion or job loss.

2. Microinsults
These small but identifiable actions can include following a minority or poorly dressed person around a store as if they were a thief or ignoring a Black person in a group of white people as if their opinion was of no consequence.

3. Microinvalidations
Microinvalidations are statements that contradict and therefore dismiss the experience of marginalized groups. A woman or man subject to unwanted touch or an insulting story may experience here complaint as unsubstantiated or irrational. An angry complaint is dismissed with comments like the person is too angry, too insensitive, paranoid, and other words denying the validity of the complaint.

Psychology of Prejudice and Discrimination

Psychology of Race and Racism

Posted by Geoffrey W Sutton at 9:28 AM
Email ThisBlogThis!Share to TwitterShare to FacebookShare to Pinterest
Labels: Microaggressions, psychology of race, racism