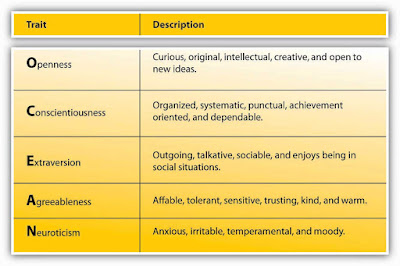 Scientific studies by Paul Costa and Robert McCrae (1998) established a basis for the five factors known by the acronym OCEAN, which I describe below along with some references.

This is taken with permission from a counseling book (Sutton, 2020).

O- Openness to experience includes curiosity, imagination, and creativity. People high in this trait appreciate complexity and originality and enjoy new experiences. People low in openness present a closed approach to new experiences and prefer routines and less abstract artistic works or forms of entertainment. People high in openness support universal values such as equality and justice for all (Douglas et al., 2016). Openness is a relatively stable personality trait positively correlated with creativity and originality and inversely related to political conservatism (Soldz & Vaillant, 1999).

E- Extroversion  (aka extraversion) is often considered along with introversion. In a sense, the dimension identifies where a person finds their energy. Extroverts thrive in the presence of others while introverts need to withdraw from people to restore their souls in solitude. People high in extroversion are often described as sociable, assertive, outgoing, energetic, talkative, fun-loving, friendly, and self-confident. Positive descriptions of people with introversion scores are quiet, reserved, thoughtful, and introspective. High extroversion has been linked to high income and political conservatism (Soldz & Vaillant, 1999). Extroversion is a reliable predictor of wellbeing and overconfidence (Schaefer et al., 2004). There is a positive link between extroversion and forgiveness (Hodge et al., 2020).

A- Agreeableness refers to patterns of interactions with others and contrasts with disagreeableness. People might describe those high in agreeableness as altruistic, trusting, modest, humble, patient, tactful, polite, kind, loyal, helpful, sensitive, amiable, cheerful, and considerate. Highly agreeable people are highly respected and well-liked. They quickly show sympathy to strangers. The unfriendly end of the trait is represented by words such as abrasive, rude, callous, antagonistic, cruel, and sarcastic. People high in agreeableness tend to be high in gratitude and forgiveness as well (Hodge et al., 2020).

N- Neuroticism refers to emotional stability. Sensitive clinicians reframe this term as Emotional Stability. Essentially, the trait describes personal adjustment by considering self-confidence, self-esteem, anxiety, sadness, and anger. People high on neuroticism may be described as moody, pessimistic, timid, wary, insecure, unstable, testy, fearful, and awkward. Those low on neuroticism may be considered stable, and confident. People who score high on neuroticism likely have more difficulty than low scorers with both self-forgiveness and forgiveness of others (Hodge et al., 2020).