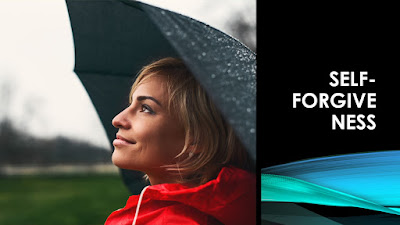 In psychology, self-forgiveness is an intrapersonal process of reducing internal distress associated with a person’s perceived violation of a moral standard. Unlike interpersonal forgiveness, which focuses on forgiving an external offender, self-forgiveness is an intrapersonal process in cases where people offend themselves. The moral violations may be actions harming oneself or another person or the failure to engage in an act, which resulted in harm to oneself or someone else.
In his dissertation, Brandon Griffin studied a dual-process model of self-forgiveness, which was supported by two factors measuring relevant aspects of cognition and emotion. Specifically, the model and the associated Two-factor Self-Forgiveness Scale, measured 1. Decisional Affirmation of Values(DAV) and 2. Emotional Restoration of Esteem (ERE).

The impact of the perceived moral violation may be felt across the usual spectrum of human functioning (for a six-dimension model, see SCOPES).

Self-Identity- A person’s sense of self can suffer as a result of a significant harmful act. Self-identity includes many components such as one’s social roles as well as linked beliefs, emotions, personality traits, and health. When a person’s self-identity includes a moral standard associated with religion or spirituality, a person may feel they have offended God and committed a sin. Identities can also be associated with social roles like a profession or family role. These roles can be impacted by certain personal acts—including loss of job and family relationships.

Cognition- Thoughts of self-condemnation can worsen a person’s mental state via rumination. Mental images of the offensive action can also cause ongoing distress.

Observable behavior patterns/personality- The impact of an interpersonal offense can result in avoiding the offender. Although it is a stretch of the avoidance concept to think of avoiding oneself, people can avoid places, people (e.g., victims, others present during the offense), and objects (e.g., movies, items) that remind them of the offense.

Physiology-We may expect biological effects in cases where an offense is experienced as significantly stressful. Psychosocial stressors are known to negatively affect general health and mental health (For a meta-analysis, see Davis et al., 2015).

Emotions-Common negative feelings linked to unforgiveness of oneself include anger, guilt, anxiety, sadness, and shame.

Social context-People may experience distress over their actions in different ways based on time and space contexts. What was acceptable behavior 40 years ago in the context of war or employment may no longer be acceptable. In addition, people may change their moral standards and view past behavior differently.
Self-Forgiveness and Recovery

General audience publication on Self Forgiveness

Posted by Geoffrey W Sutton at 8:23 AM
Email ThisBlogThis!Share to TwitterShare to FacebookShare to Pinterest
Labels: forgiveness, SCOPES model