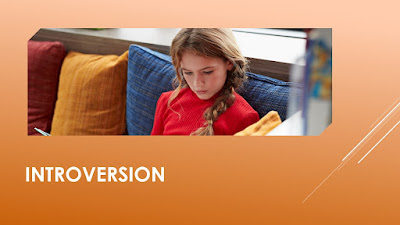 Introversion is a broad personality trait usually considered as part of a spectrum with introversion at one end and extraversion at the other end. People with a high degree of introversion are described as quiet, reserved, and deliberate. They tend to be more sceptical of others' views and low on showing their emotions.

Extraversion-Introversion is one of the Big Five traits measured in Big Five tests available in many languages.

It is commonly held that extraversion is the ideal dimension of the introversion-extraversion trait spectrum. In their study headed "Quiet Flourishing," Rodney Lawn and his colleagues (2019) that beliefs about having an "extraversion-deficit" were a factor in well-being. The authors suggested introverts may boost their authenticity and general well-being if they increased their acceptance of introversion.

Some writers refer to people high on the introversion trait as introverts and they may be described as introverted or introversive. Note however, that in psychological science, personality traits are viewed as a continuum, which avoids creating the impression that people have specific personality types. That is, when measured on a test of introversion, people may score in a range from high to low.

Carl Jung (1921) is credited with the early conceptualization of introversion and extroversion.

Introversion and Extraversion are one of the features in the domain of Observable Behavior in the SCOPES model of human functioning.

Posted by Geoffrey W Sutton at 7:48 AM
Email ThisBlogThis!Share to TwitterShare to FacebookShare to Pinterest
Labels: personality theory